The Roving Quill a memoir of etchings and wanderings
The week that just ran past, like several of the others that have been. Authorities at SIMC finally decided that it was time now, to send students into major metropolitans, to make presentations to prospective recruiters.
So, now I am home, in Kolkata. And the more exciting bit is that I got here by train.
The last time I was on a train, I was travelling from Kolkata to Pune for the first time. The Azad Hind, which would take a good 48 hours to get to Pune, was my last memory of a train ride. This time, I was booked on a Duronto Express, from VT, Mumbai to Howrah, Kolkata.
The beginning to the journey was painful and traumatic, owing to the fact that my co-passenger, Saimantika Mitra (Yes, that is all one person, but one can call her ‘Shoi‘ for convenience =p) was loaded with more luggage than she could carry, and the rituals of loading and unloading luggage had to be repeated on the bus from campus, in the auto, the Tata Sumo which took us to the Metro Link bus, the Metro Link bus, the taxi in Mumbai, and then finally onto the Duronto. No wonder my limbs are giving away now.

Once we got to Platform Number 12 on CST (which is the new name for Victoria Terminus), we were pleasantly welcomed by a train which was painted various shades of green! After wading through Mumbai’s lunch-time traffic, no colour looked better! Bright green, with shades of an autumn orange and a violent stripe of blue in intervals. I have never seen a more beautiful train. 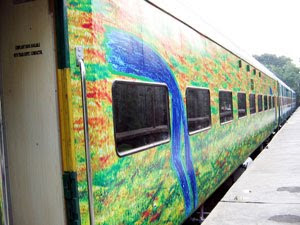 After the luggage was loaded, and we were settled, beginning to adjust to our new neighbours for 24 hours, a Mr Mohan – the marwari diamond merchant, an Oreste Fernandes (whose name kept reminding me of toothpaste, and I later realised to my amusement why: Oreste = Oral B + Crest) a auditor for Sunita Refineries, who dealt in onshore oil rigs, and another Bengali diamond kareegar, who lived 15 minutes from Tarapeeth, outskirts of Kolkata and had the most disturbing ringtone, which went like ‘Shining in the setting sun, like a pearl upon the ocean, come and feel me….’ Like I had not had enough of it on my ‘Jumpla toh Sampla‘ trip!

The journey was amazing; Shoi and myself entertained ourselves with an array of magazines, Archies and Tinkle. The only punctuations we times when we were fed, and honestly, this train ensures that no one gets hungry at any point in time. Every half an hour to an hour there would be more food brought to us; from evening suppers, to tea, to soups, to dinner and then breakfast, and breadsticks, and lunch, then again soups and snacks and tea another final time! On neat little trays with even neater packing, its hats off to Mamata Di, on this one. 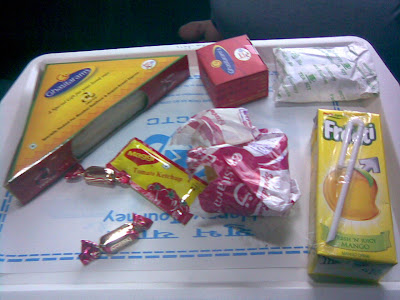 Supper #1
The view on the way picturesque, and I felt really awful for leaving my DSLR back in Pune. Beautiful trees, with bright red flowers making them look like they were alight, tiny streams with little pebbles strewn around, gigantic factory facilities, stations with names such as सोनुआ (Sonua) & टीनिया (Tinia), a rainbow and so much more whooshed on by, while the super fast chugged on merrily on its tracks. We were slowed down for a while by certain Maoist strikes, but not for long. Time passed, quick and well thanks to Shoi and my endless ability to talk about nothingness, our acrobatic performances to try and get to the top berth which automatically led to the ‘brain freeze’ as the air conditioning felt exceptionally partial to us, and even under 3 layers of Indian Railway bedding, our teeth chattered. Apart from that, we also watched ’13 going on 30′ on my laptop, and performed an entire show of Russel Peters between ourselves. 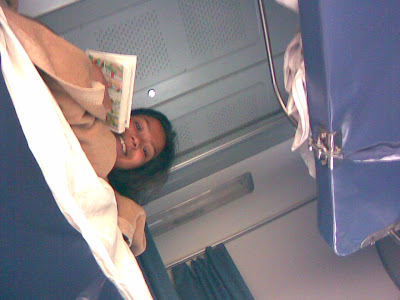 Shoi and her Tinkle dangling from the upper berth 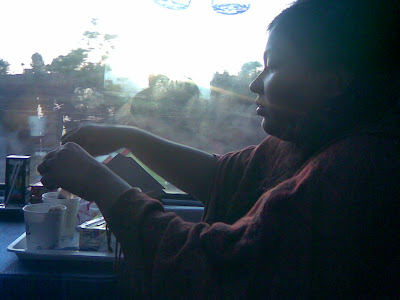 We made it, into Howrah at around 8pm, which was 20 minutes behind schedule, and I found Durga Ji and Pepsi Mama waiting. It felt good to be home.

As we said our goodbyes, I found myself walking to the parking lot, and spotted Mashi’s copper coloured Swift; the second familiar sight for me in Kolkata. Roads were clear, and the sky was that familiar rust mixed with ash colour, which usually is a sign of rains. Breathing the air in, there was a feeling of contentment.

Home bound, is the best journey ever!

0 thoughts on “Aboard the Green Express”