I have been most productive in my Kolkata mini-break.

a) Have been making calls to all random organisations to allow me to come and make a presentation to them to recruit a few batch mates, in a little above slave labour rates.

b) Have been taking appointments with my gynae, dermatologist and family physician to ensure I haven’t grown any new ailments. I don’t think I could deal with any more, at least for the nest 20 years!

c) Have celebrated Holi with cousins, in Kolkata for the first time. All these years, we did the mad colour and water routine with friends. With family, it was much more civilized. Only abeer (dry colour) in the beginning, which was made into rather interesting concoctions – blue colour + noodles, pink colour + suji halwa et al. These were all shoved into our unsuspecting collars, and I found out only during the bath. Since Didi and Jijaji had come down from Mumbai, for their first post-marriage function, it was decided that we would all go ‘Aquatica’ – the water theme park. It had the works:- the wave pool filled with crimson water, a pseudo ‘Niagara Falls’, a bunch of slides, tiny maze-like pools filled with water, rides etc. With complete dhikchik music, an interesting number of Tollywood hit remixes, I had a great time! This was until the point wherein I was sent down a ride, and I hit my head against goodness-knows-what and saw darkness for 10 seconds, and realised that I have a bump above my left brow which looked rather disturbing! After darkness, there were colours, and stars (just like in the cartoons), and I realised that I had crowned myself Bumpy, the IIIrd. After more than 24 hours of ice and Thromboform, I am much better. Nevertheless, it was a fun Holi! 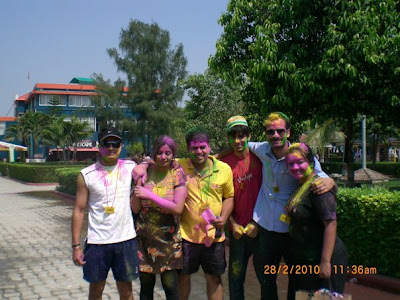 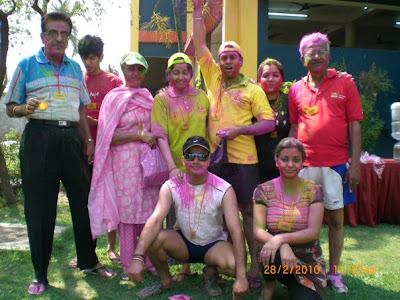 d) Have noticed so much about the lane I live in. ‘Para’, as it is known in Bengal, shapes the lives of people who live in it, children who grow in it. Mine, in specific, is very special. 18, Russa Road, Third Lane is where my mother was born and grew up. Almost everyone knows her here, and me (since I supposedly look like her). I am often stopped in my tracks by the cry of ‘Ei toh Guddu r mei’ (Ah, there is Guddu’s daughter). It is a strange feeling for me, a sense of belonging. Even the rickshaw-pullers dadas know me here. I just have to get onto the cycle rickshaw and they will ask me where I want to go- “Rajen Da’s, Golf Green or Indrani Park?”; Mamajis, Bhuas and Masi’s houses respectively. Sitting on those rickshaws, makes me the happiest person on earth!

e) I spent quality time with Dennis. He is now 3 years old, and grows more handsome by the day. 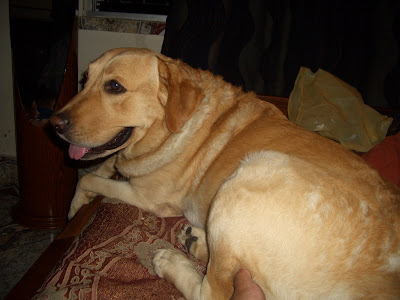 f) I bought a new battery for my Nokia 1100, which houses my Kolkata sim. I am now available on non-roaming! Come to phones, I will need a new one, and I am really lost between the iphone and my loyalty to Nokia. Even within Nokia, the E71 or E72?

The weekend has passed, and soon it will be time to head back to Lavale. Probably the first time that I am not upset to be going back. I guess I will miss the place, after all.

Signing off for now, with a bulge, Bumpy the IIIrd.