One of the first fun memories I have, after moving to the States was the July fourth trip that I took to Minneapolis.

It began not very different from several memorable trips I’ve taken – it started with a Google chat ping. I was a part of a conversation between Akshay V. and his childhood friend (and someone I’d heard loads about from common friends), Tulika where they were discussing how I would be transported to Minnesota for the long weekend. I attempted to punctuate with rationales to decline such as I was on a student budget – but before I knew it, there were tickets in my inbox.

So, fly I did, to the land of 10,000 lakes – and my first new state – Minnesota. Here, one could wonder if there really are that many lakes. A little bit of research and local resident input informed me that the state has sort of under-marketed itself. Apparently, there are 11,842 lakes! What I loved most about Minneapolis (one of its major cities) and around was the abundance of outdoor activities available – paddling, hiking, SO many campgrounds, beach activities by the lakeside (yup) and even wildlife spotting.

The plan for the weekend was to congregate at the home of a friend who was living and working in downtown Minneapolis, explore the city and around, grab half the REI store and camp at St. Croix State Park, and whip up some bizarre food combinations that reminded us of home.

On the first day, we brunched and set out to burn some of the bacon off by kayaking in Lake Nokomis, which could easily be mistaken as the ocean because of its sheer volume and the number of people lounging on its sandy banks with beach umbrellas. 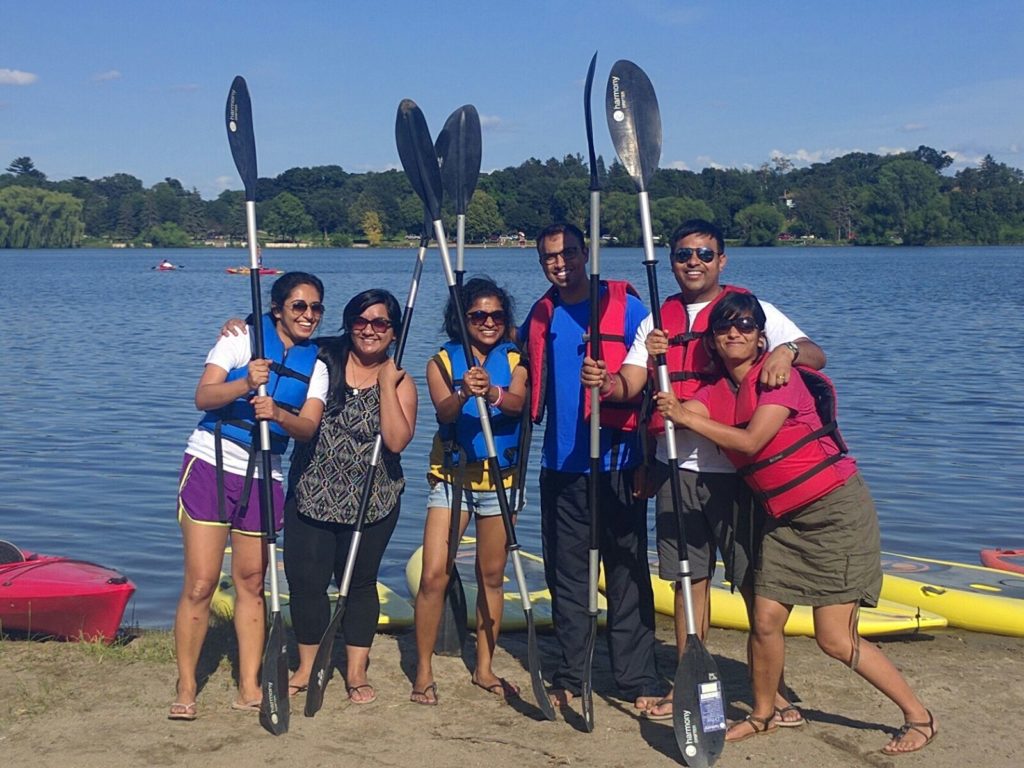 The latter part of the day got more exciting by the hour. We visited the Indian store to stock up on ingredients for our plans for a home-cooked dinner and prep for the camping food. It was my first time at a Patel Brothers store – and quite frankly, I stood in the aisles surrounded by every imaginable pickle and chutney until I was jerked back to real life. Till date, homesickness takes me to this overpriced store in Maryland, but I can always find something like banana chips, gulab jamun mix or kulfi to cheer me up.

Getting back on track, dinner was a most elaborate affair with paneer, bhindi, chicken and a variety of sangrias to accompany them! I had been deprived of company, conversations and curried food for almost a month – and even mincing garlic seemed like a fun task amongst this lot.

The next morning, we drove to St. Croix State Park playing a reinvented version of Name-Place-Animal-Thing where I earned major klout for knowing more than four city/country names with the letter ‘Y’. On reaching our camp ground, I was frankly amazed by how easy it was to assemble the tent and other gear. Our ‘glampsite’ (glamorous campsite) was all set up. The fire was lit. The wine was opened. T’was the time to bake litti chokha on the grill. Having had many Bihari friends in under-graduate I was quite familiar with the delicacy – but never imagined eating it in rural Minnesota with dollops of ghee! 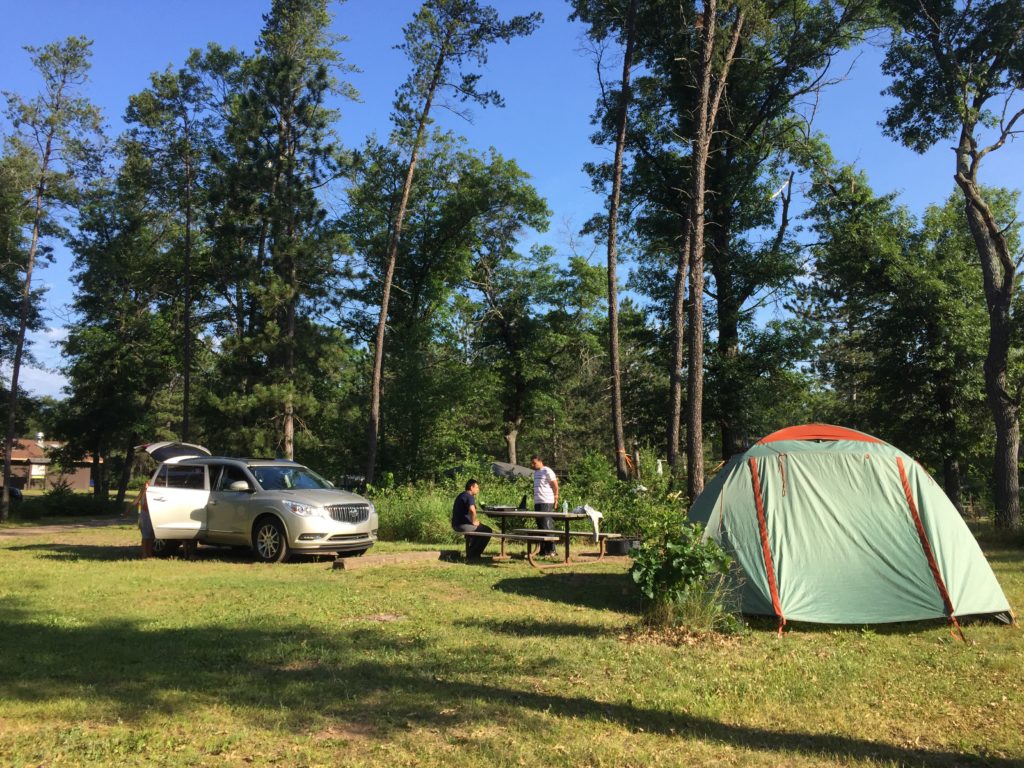 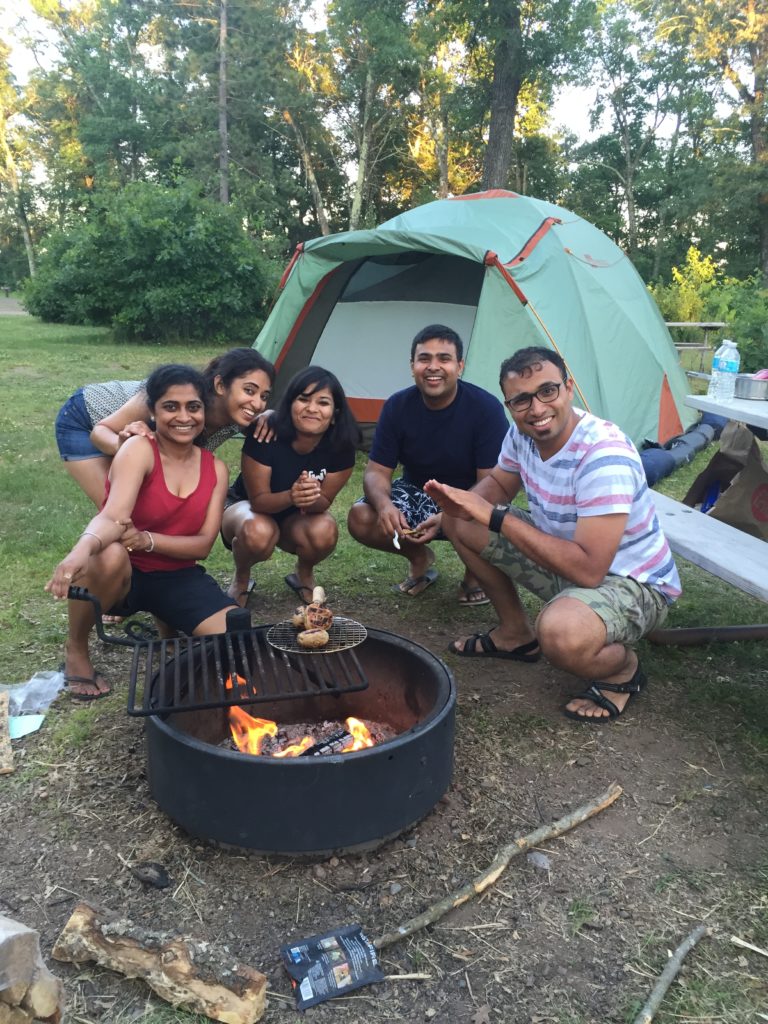 On returning to the city, we toured some local attractions such as the majestic stone bridge that dates to 1883 and saw that people were settling down on the grassy slopes around the Mississippi river to watch the Independence Day fireworks.I’d been camping in Oman, but I learnt that desert camps ≠ woodland camps. More noises and less dangers of scorpions and rattlesnakes, but equally enjoyable! I can hardly remember how the night flew past and all six of us fell asleep in our very comfortable and spacious tent.

As I got on the flight back to DC on the lesser-known, but quite brilliant Sun Country Airlines, I thought about how my only exposure to Minnesota so far was through my favourite bookish, soy candle store – but I discovered so much about the friendly state where people smiled and say hey to strangers on the streets – despite rain or shine. No wonder Minnesota Nice is a thing!