Skip to navigation Skip to content
To be completely honest, while we were planning this trip, Switzerland was the place I was probably least excited about – but it happened to surprise me the most. In almost all the other countries, there were these elaborate lists of things to see – museums, galleries, rivers or just anything that made them stand out. In my head, Switzerland was the place where some Bollywood movies were shot, a lot of rich people lived, and Toblerone was manufactured – didn’t seem all that much to be wound up about.
All of that changed in a jiffy.
Where I last left off, we had just consumed unearthly amounts of Black Forest gateau – the original stuff – and were driving through Germany. A few years ago, there would be elaborate procedures while crossing countries across Europe, we were told. But today there are no check points and the only way you can probably tell that you had left one country and entered another would be by the colour of the asphalt on the road.
In some time, we came across a huge tunnel – Switzerland has a sort of an obsession with the underground, as I understand. I’ve hardly ever seen such a network of tunnels – and this particular one was taking us to Schaffhausen, in northern Switzerland where the mighty Rhine forms what is the largest waterfall in Europe.

The road to get there was right out of a story book and you could see that the snow on the tips of the Alps getting more and more prominent. At 500 feet wide and 75 feet high, the Rheinfall (as the Swiss call them) are not the most majestic of waterfalls – especially not after one has seen the Angel Falls or the Niagara. But it has a certain serenity to it – and I found the Centre Rock especially fascinating. Imagine a lone rock standing right at the mouth of the rumbling cascade – and you could climb a couple of stairs and reach the top, surrounded completely by the rushing waters.  I couldn’t get as many pictures as I would have liked to, and the Sun being in an unfavourable position cost me some precious photo-moments, but I guess that’s what happens when you’re in a boat (reminiscing ‘Maid of the Mist’ ride). There are large variety of selections of boat tours in the falls basin which take you over to Center Rock and further downriver. We took a twenty-minute one, for around 6 Euros because we didn’t have enough time to actually climb the rock, but it was quite a ride!

There was a strategic Indian chai stall called ‘Gourmet India’ at the entrance of the tourist area in Schaffhausen, and those who fancy a bit of ginger infused tea, like my parents were rather pleased.
Onward, we were headed towards Zürich – the lifestyle capital of the country. The city feels mostly like any other European city that we had been to, save for the oh-so-large lake that it is built around. Lake Zürich could almost be mistaken for a coastline, such are its dimensions. We walked around Bahnhofstrasse, the city’s main downtown street and what is said to be one of the world’s most expensive and exclusive shopping avenues. Lined with cafes and pastry joints, it seemed like just another casual summer day in Switzerland, as we reached a gazebo and saw that some couples were dancing to a record playing a traditional Swiss tune.
After a couple of hours of ambling around the lakeside and getting a bite to eat, we headed back to the coach which was taking us to the delightful little resort town of Engelberg, where we would be staying for two nights.
And what sights awaited us, on the way.
As we drove away for the urban Zürich, slowly nature began to envelope everything that our eyes saw. I cannot even begin to describe that shade of green, those clouds that seemed close enough to touch, the beautiful mountains – their tips glistening with snow and reflecting the little sunlight that the clouds would allow.

If heaven was on Earth, I’m sure we were there. As we were getting there, it began to drizzle and then really come down on us. While I was busy trying to get the best droplet pictures from the large glass windows of the bus, I could hear gasps from all around me – I think I even saw someone staring open mouthed. I had some music plugged in, and by some kind of telepathy, the iPod knew exactly what to play and I’ve hardly ever felt so overwhelmed like I was in those few moments.

It was breathtaking – in the real meaning of the word.
I could probably go on, but we had reached Hotel Central which was a cosy place snuggled in the town that is famed as a ski resort. All these days we had been hopping around cities, and had gotten quite used to a new hotel almost every night – but the moment we opened the doors to our room here, I found myself out of words. The room had two balconies – one of which looked out into the alpine valley of Engelberg and the rain was showing no signs of going away. After minutes of staring out into the rain at the dark skies and the mountains which were almost completely covered with clouds, I decided that this was no place to be sitting still in a room! So on went the rain-proof parka, rubber sandals and earplugs. Stepping back in only for dinner (which was excellent, I must say!), we spent almost all evening walking the streets which was dotted with resorts and hotels, and was yet so peaceful. The rain had stopped, the air cleared up and there was a sudden drop in temperature – nothing would deter us, however! We located a city map near the main railway station and found that we were really close to a brook – followed our ears to that sound of water tumbling over stones and came to it. Swollen due to the recent rains, it was such a beautiful sight. I can close my eyes and imagine meadows and grass on both sides, with those houses which look like they were always a part of the landscape, and that stream gushing past. I could have spent a week in this town, and I probably will someday – I thought while we walked back to the hotel.
The next day we were visiting one of Switzerland’s most famous peaks – the Jungfrau. Crossing through the Brünig Pass, we drove through the picturesque setting made up of icy blue lakes, mountain paths and of course more clouds. After lunch at Swiss chocolates for dessert, we got onto the first of two cogwheel railways which would take us to Jungfaujoch – the highest railway station in Europe, located 3,454 metres above sea level. With every minute the air was getting colder and what we could see from our little toy train were nothing beyond miraculous. A carpet of green, merging into sheets of ice. Cows. So many cows. And their ringing cowbells making a pleasant little tune. A wonderland of ice, snow and rock waited for us at the very top. 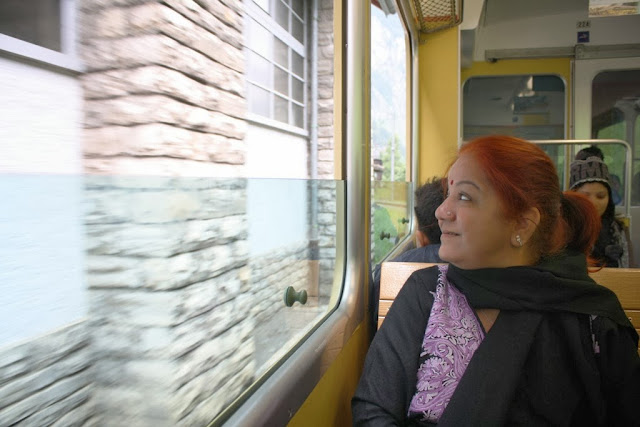 By now we had obviously layered up – Baba more than any of us (Read: Bengali and monkey cap phenomenon). Having conveniently left our warmers in Muscat, we had to make do with more layers, which isn’t the best of ideas when the temperature is below zero degrees. After exploring the gallery of panoramas and the spectacular ice palace, we stepped out into what is known as ‘The Plateau’ – out in the open. It was white everywhere, like I have only seen in movies and pictures. And nothing I could do, say or even click would match the excitement I felt in that moment. After a hundred pictures, helping other families with theirs, friendly snowballs fights and seeing a couple take a picture on the snow in only their bare essentials (Not joking!) we decided to go back indoors to tend to our frozen fingers, toes and faces! A bit of souvenir shopping and sending a postcard to my grandmother from the literal ‘Top of Europe’, we took the trains back and drove to Interlaken to spend the evening. 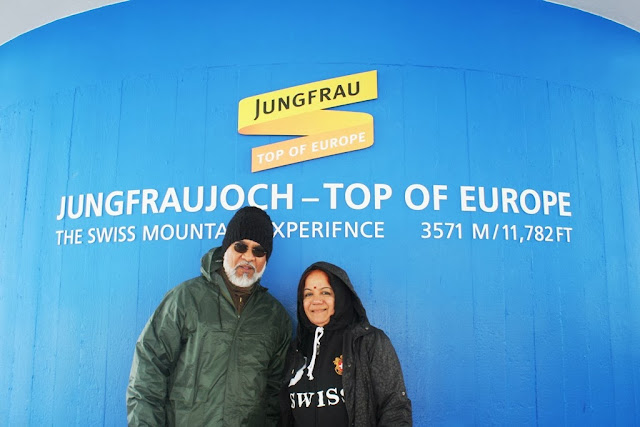 The next day we visited the other most frequented mountain – Mount Titlis. The exciting bit was that the journey was going to be much more comfortable – we just had to get into two cable cars and be pulled to the very top! The Titlis cable cars all bear a flag of a country from across the world, and although I wasn’t completely thrilled to get into South Korea at first, in the return journey we got Brazil and I was satisfied!
Another huge cable car (capacity 100) took us from the Station Truebsee to the attractions atop Mount Titlis – a hall of fame, observatory (where it was actually snowing!!!) after which we reached the ‘Terrace’, which was this mountain’s name for yesterday’s snow plateau. It was a little colder here (we were told -5 degree Celsius) and my legs almost went numb as we tread across the fresh snow to get to the ‘Cliff Walk’ – the highest elevation suspension bridge in Europe – which scared the hell out of me and the Titlis Ice Flyer – for those who were more abundantly clad! 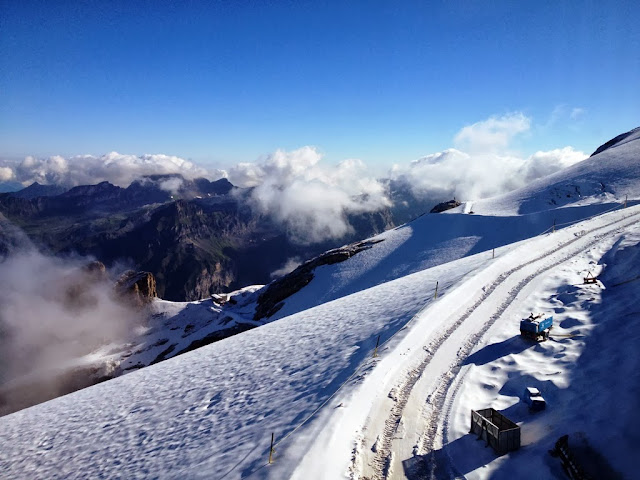 After a heartwarming hot chocolate drink at the Titlis Panorama Restaurant, which overlooks the resident glacier and ice cave, we took the three cable cars – Gerschnialp (at 1,262 m), Trübsee (at 1,796 m) and Stand (at 2,428 m) to base and drove off towards Lucerne, bidding goodbye to the enchanting Engelberg.
We reached Lucerne by evening and had more than five hours to shop, explore and relax at the last of the Swiss cities we would be visiting. First, I must mention the Lion Monument (Löwendenkmal in German) – a sculpture hewn in the 1820’s commemorating the Swiss Guards who were massacred in 1792 during the French Revolution, when revolutionaries stormed the Tuileries Palace in Paris, France. As Mark Twain once said, it really is possibly the most mournful and moving piece of stone in the world. I thought it would be a really small structure, but the impact it creates is colossal. You have to see it to really hear the stone speak to you about the angst that the artist was trying to depict. Quoting Mark Twain again, “The Lion of Lucerne would be impressive anywhere, but nowhere so impressive as where he is.”
We then walked to the shopping district, where we stopped only briefly to buy Ma new shoes (the snow walk had ruined her trainers), Swiss knives, Cowbells (Just in case a DDLJ moment happened) and of course a t-shirt with a white cross on it. Bang next to it is the Kapellbrücke or Chapel Bridge, a covered wooden footbridge spanning diagonally across the Reuss River. It was constructed in the 17th century and stood tall until a 1993 fire destroyed a part of it, which has since then been restored. It is miraculous to see such an ancient structure with flowers on both sides, snaking across the river – and a delight to walk across. After a few beverages and Wi-Fi searches near Lake Lucern, we took the bus back to Zürich. It made me sad to see buildings and houses and the decreasing greenery, but I think that clean air did more good than I thought it would.
As we settled down at the NH Zürich Airport Hotel, I could still picture those suspended clouds, that temperamental weather and the greenest grass that I had ever seen.
I’ll be back soon, Switzerland. And this time, on a train.

3 thoughts on “Heaven in Helvetica”