A lot has happened over the months. It is almost the end of October and I am overwhelmed by the fact that I have spent the past 6 months being employed and so far, been doing okay.

The cliched ‘corporate’ was meant to be this big, bad world which was to remind you, visually, of Michael Jackson’s ‘Thriller’. So far, there have been bad days, days when I have wanted to throw myself off a cliff, days when I have wanted to throw others off a really high cliff (tied to a cannonball, of course); but overall, it feels good to reiterate, I’ve been okay.

Today, I heard the most interesting theory from a colleague at work. She calls it her ‘Bus Theory’. In brief, she believes that one’s life is a bus ride. You could be the rickety Sector 55-56 in Gurgaon or the bright red double Decker in London, but essentially the journey is on a bus. As days go on, your bus travels to different locations, varied people climb onto your bus- you have a good/bad time in their company and when the time is right, they take your leave. One person may get onto your bus more than once through your journey. Some people might get on and you never want them to leave, but they do. Some people you want to dispose of immediately and they don’t plan on leaving at all. Similarly, there could be various permutations in the elements. The moral of the theory being that dynamism and change is the center of life, as we know it. We cannot attempt to hold on to things, people, moments, no matter how they precious they might be to us. If we do so, we’d be a really slow bus, which keeps stopping, to reminisce about the past, and nobody new would want to bet onto such a vehicle.

Letting go has always been difficult, and I guess, being the Arian, no matter how many doctrines of the opposite are professed, will always get back to being the sentimental fool.

This post is dedicated to SDC, a friend, a colleague and most importantly, my Bengali brother-in-arms. Have only known him for half a year now, and it is time to say goodbye already. He is moving on to a happier place, and I am ecstatic for the opportunity that has come his way. The heart however saddens to think that looking up from my desk, I won’t be able to see his expressions of disgust at almost anything that came his way (Client calls, Lunch menu, empty cigarette packet, Punjabi music, stinkers and so much more!). Will miss him, not so glad he’s getting off the bus. Am so glad, we did a full-fledged party with him, before he leaves. 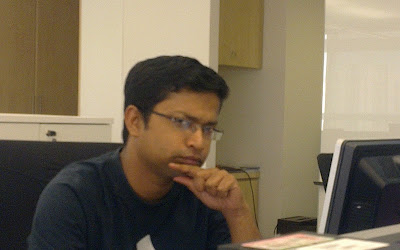 Bringing in the happier tangent, after months and months of looking, I finally have a place to stay in, which is (thankfully) not invaded by fungi. A cosy little apartment with turquoise walls and a television set 🙂 We also have a refrigerator, a cooking range and a washing machine (God bless technology), so on the domestic front, things are smooth. There has however only been just one party (in SDC’s honour), and I hope to have more soon 😀 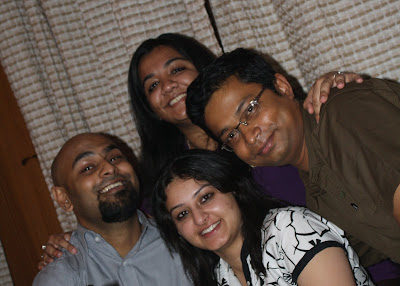 To add on to the list of happy things:

# Have gotten over my hesitation to use the Delhi metro! I am a pro now 🙂
# The world is actually interested in CNN Heroes!!
# Have found a website dedicated to the Bro-Code. I often have the privilege of enlightening Bros the world over 😀
# I can make my special Baked Beans anytime I feel homesick!
# I have found my thing to do when I get back home from work (TV dedicated) – I watch ‘Lie To Me’. Brilliant.
# The Movie List has reached 930!
# Will be going home (Muscat) for Diwali, and then onward to Kolkata (Woooohoooo!

0 thoughts on “Almost half a year in black and white”