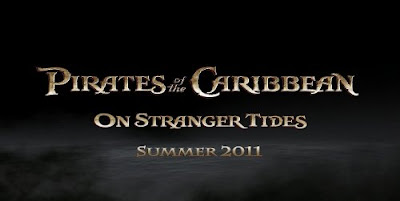 The fourth movie of my all time favourite Hollywood blockbuster series Pirates of The Caribbean released worldwide on May 20 and boy, was the world geared up for it.

Beginning from the local newspaper supplements, interviews, advertisements to posters and social media platforms – looking at pictures of the notoriously charming Jack Sparrow (There should be a ‘Captain’ in there somewhere!) was such a delight!

Elaborate were the plans to watch this movie on the first day of it’s release – had lugged along my foam pirate hat, donned the new crossed swords silver earrings, worn an extra layer of kohl, set my workstation wallpaper to a huge smirking Johnny Depp and coordinated Swetha and Akshay to scurry themselves to Gurgaon, to ensure we witnessed the brilliance all together. Best seats had been booked a day before – no mate, we take no chances! Crew consisted the aforementioned, Chops, Amb, Sahil and yours truly. Amit and VC joined in later with not-so-awesome seats, but their proximity to Penelope Cruz seemed to better all grievances!

So Friday at work came and flew past; as is customary I had mounted the 3D glasses atop my spectacles – not to say that I wasn’t quite a sight, myself!

“On Stranger Tides” opens in Spain, where a man has been recovered from a fishing net with a journal he claims contains a map to the Fountain of Youth. The British crown gets wind of this discovery and sets its own team out to recover it, led by a powdered-wig-wearing Captain Barbossa (Geoffrey Rush). Captain Jack is placed in the brig (Yes, once again) of none other than Blackbeard (Ian McShane), whose daughter Angelica (Penélope Cruz) is both onboard, leading the charge, and a former paramour of the previously ambiguous Captain Jack. 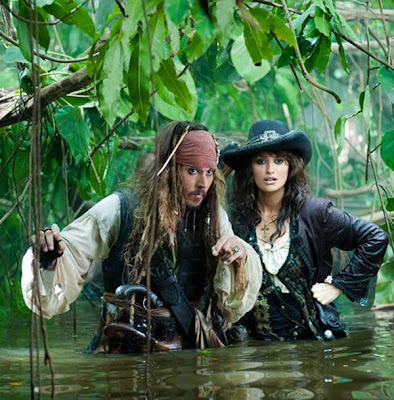 A majority of the series’ fans would be incredibly relieved to know that the film has greatly reduced the number of characters (hope one wasn’t too attached to Orlando Bloom or Keira Knightley) and blessedly focused on the shifting allegiances of our beloved Captain Jack Sparrow! However, I was rather disappointed to not see much of the Black Pearl (except for in a bottle!) and the Caribbean seas, the tropical destinations and the oh-so-blue waters were mesmerizing (An absolute “Welcome to the Caribbean, love.” Moment!)

Coming to the action sequences, the sword fights leave much to be desired (Especially for those who have watched parts 1, 2 and 3); at the helm of affairs are the mermaids – sea beasts with fangs and willowy tails (One of whom falls in love with a clergyman and sheds one very indispensable tear) – which would shake up any fan of Hans Christian Anderson and Disney’s “The Little Mermaid.”, but the special effects team are indeed deserving of applause. Among other elements, The Fountain of Youth was a vivid demonstration and the Spanish were surprisingly devout!

The first ever director change doesn’t seem to have suited the fancies of most; I would myself prefer a Gore Verbinski to Rob Marshall. Not that it seemed to have changed anything for Jerry Bruckheimer. Pirates of the Caribbean: On Stranger Tides had the biggest opening weekend in the year in the US and Canada when the film collected US $ 90.1 million grossing over 2009’s Harry Potter and the Half-Blood Prince.

With its running time of 135 minutes (the longer the better!), the celebrated Hans Zimmer OST played out with the credits and regardless of the movie being rather unspecial, cannot wait for Pirates of the Caribbean: Part 5! 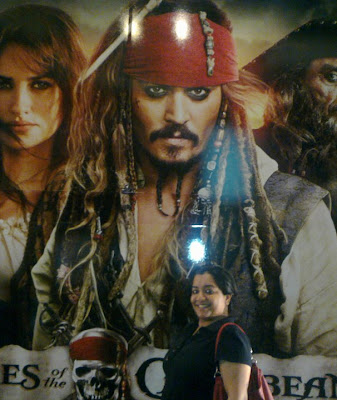 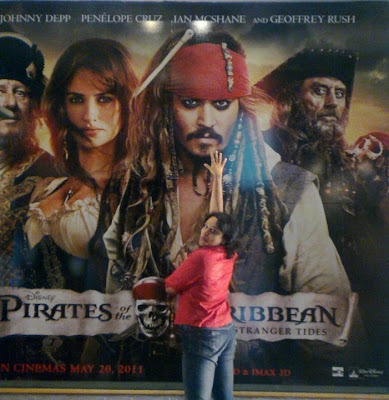 Drink up me hearties Yo Ho!

1 thought on “On Stranger Tides”