Ritesh Sidhwani and Farhan Akhtar have, for quite a while been making movies which appeal to audiences with absolutely ordinary, even mundane lives to break free; they have been screaming out ‘One life, live it to the fullest’.

Be it the original college boys in ‘Dil Chahta Hai’, or the superbly inspiring Hrithik Roshan story in ‘Lakshya’, the musical muses in ‘Rock On!’, to the most recent of bromances in theatres now – there is a strong message embedded in the gentle storytelling, an enviable camaraderie and the most breathtaking of locations which make them must watches and definitive DVD purchases!

From the time the movie began, I began to reminisce in my subconscious about where I had heard the title of the film before. Almost towards the end it dawned upon me – ‘Zindagi Na Milegi Dobara’ was the chorus line from another of Excel Entertainment’s break-the-rules, touch-your-soul cinema ‘Rock On’ and nothing truer than the statement – the only time a person should be in a box, is when they’re dead.

To reiterate, Zoya and Farhan Akhtar’s major triumph with this film, in all honesty, is that they stay true to what they have often expressed, of how important friends are, in our lives. Throwing in elements of love, coming-of-age and travel to complement friendship, it feels as though it could just be our story. (Minus the diva-like bodies of the protagonists, the near perfect tans and the oh-so glamorous apartments that house them- Sigh!)

Not to forget the ‘paintare’ which are quite the commonality and a reason for continued laughs over years through college and after; More so, punctuated with ‘Buoys’ – ‘The Mr The Dubey’, Bagwati, Doordarshan theme song and performance of the ‘Diamond biscuit’ parody, the plot seems to flow – almost as though there wasn’t any acting and the characters were just being themselves as we often did in college.

The adventure sports angle was particularly invigorating, not because of the adrenalin rush but to experience what a raw touch with nature can make one feel. Hence, I am immediately signing up for PADI recognised Diving Lessons. The cinematography and background score married into the story ensuring goosebumps and moist eyes on several instances. Although the end credits, reminded me strongly of the rather popular Chris Brown ‘Forever’ wedding routine, other moments like the horses running in the meadows, the wind through one’s hair, azure beaches – swimming with the fish underwater and the terrifying skydiving exercise take the cake.

Overall, no matter how much I continue to ramble about how real, fresh and stimulating the movie felt, I will be unable to do it justice.

To reflect the thoughts of numerous others, it is no cinematic excellence but I feel a little inspired; If not to buy a three bedroom lavish apartment in London, then at least, to live a little more than I do now.

Spain is now a definite addition to the travel to-do and I am undeniably going to watch the movie dobara. 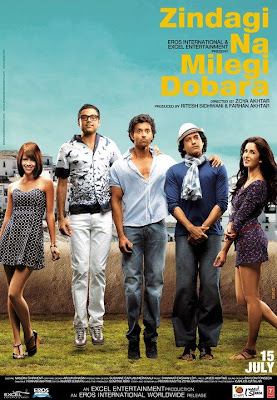