It all began with a phone call and an extended Good Friday vacation which I had presumed I would be spending on my own in the onset of summers.

I had been complaining for a while of my lack of travel ever since I had moved to Gurgaon, not very far away from completing a year now. Not that opportunity did not come my way, but somehow none of them worked out.

This however, is the account of one which did.

A trip to Himachal Pradesh, specifically, Thanedar; The route being rather longish looked somewhat like this: 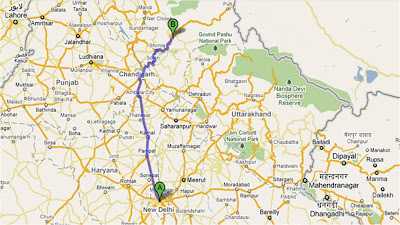 This would officially be my first venture into north India outside Delhi and NCR and I was truly excited about it! Crew consisted of Shoita, Basu, Akshay, Neha and myself – we began on 4:25 am on Friday morning and set out into what would actually be a rather ‘Bright sunny day’. Zooming through almost negligible traffic and brilliant highway roads navigated by Basu’s highly efficient ‘MapmyIndia’ as the Sun slowly crept into the sky, even through my mini nap, was picturesque.

After an array of messages from Airtel welcoming us into Haryana, then Punjab and lastly Himachal Pradesh, we were, under the professional (unpaid) stewardship of Basu, on the road in the winding hills of one of the most beautiful states in our country.

We learned from our pahari local, Neha that there were only two awesome places to eat at, en route and in line with that first stop was at Giani Da Dhaba in Dharampur (NH22) where a midway meal between breakfast and lunch comprised of parathas (which in Akshay’s opinion was just a paratha equivalent of mashed potatoes) and some Lemon chicken (YUM!), which Basu had originally decided to pack, on the way back, but deserted the thought later. The journey was then resumed, going deeper into the hills of Himachal slowly rising in altitude. The trees grew taller, the mountains grew nearer and the roads become narrower. Stopping briefly in Kalka to check on Pappu’s (Basu’s Ford Fusion) brake pads we continued onto Shimla and the air caught a chill, almost keeping in tune with the well blended mixture of music which Akshay and Basu had brought along. Beginning from the much despised Backstreet Boys, to Alisha Chenoy to the glorious Rahman and Harris Jayaraj to quite a bit of Enrique (Where the boys just prayed to the almighty for the song to end) while we crooned out loud; Himesh Reshammiya, Anu Malik, Kumar Sanu (Yes, I won a bet with Basu over who sang Tera Mera Pyaar!!! Woohoo!) To deciphering why Avril sounded so disturbed in the song ‘Complicated’ and how the lyrics of Scatman sounded unusually similar to gargling and numerous conversations around the music on hearing which, most people would just like to label us insane. 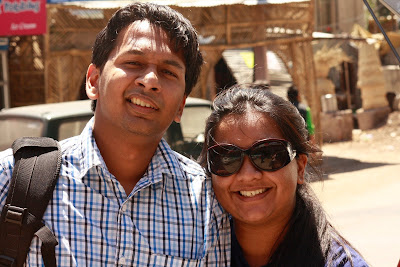 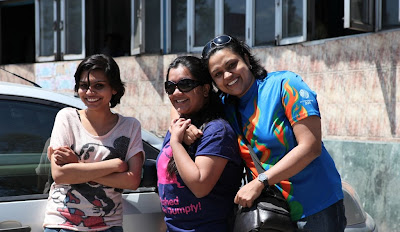 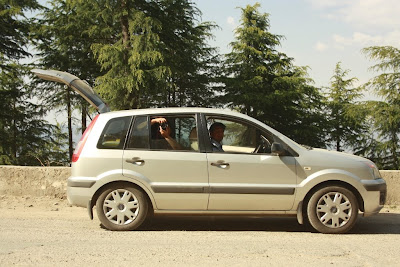 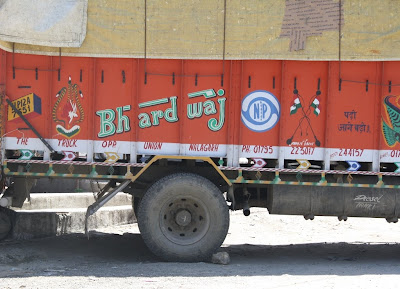 This is when I would like to come to ‘BOLW’ – one of the highlights of this trip. BOLW was, in all technicality simply a miss-spelt ‘BLOW HORN’ on one of the highway trucks. Used in all kinds of contexts, under a variety of situations, this became an immensely entertaining word, stirring even the likes of Neha into uncontrollable laughter (Note to self: Victory). Another heavy weight vehicle of note was a truck with ‘Bhardwaj’ written on it. Relavant persons are expected to understand and smile (Picture enclosed) 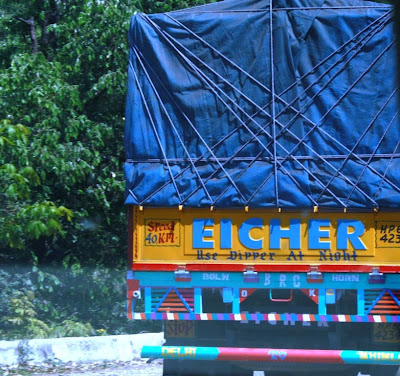 Through more terrible roads, toilet humour, voice and accent training (in Benglish and British), breathtaking vista and an Aston Martin sighting, we reached destination Thanedar at around half past six, just in time for the sunset. We put up in a government guest house which was wooden, cozy and had an adjoined verandah that looked out to the hills. Akshay occupied himself with setting up the tripod and taking pictures of the small town lights sparkling in the otherwise pitch black hills. In no time, dinner was consumed (Over more BOLW jokes, of course) and before we knew it, there was snoring.

Day two was about exploring Thanedar and areas around it. On the itinerary were sunrise, Tani – Jubbar Lake, Hatu Peak and my personal favourite, river Sutlej gurgling through the hills and hugely tempting to the water baby part of me.

After a breakfast of omelet-bread and tea, we set out to conquer Hatu Peak and through the most forbidding mountain road I have ever come across and the exhilarating feeling of our first rezendevous with snow for Akshay and me, excitement levels were on a complete high! The first sighting of the snow-capped Himalayas is a feeling which causes one to draw in breath and almost forget to breathe out – truly magnificent and out of this world. Although, I could hardly get any shots of the panorama, others with better lenses captured amazing shots of the mighty mountains and the descending pine forests and narrow roads among them. Pictures from the beginning of the day, as follows: 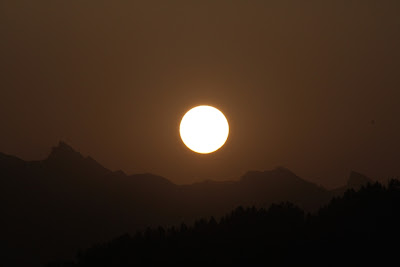 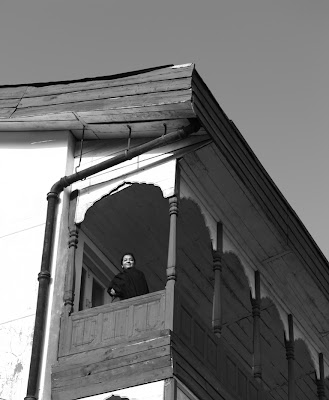 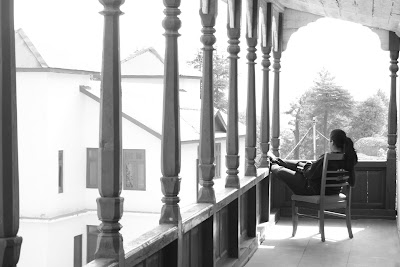 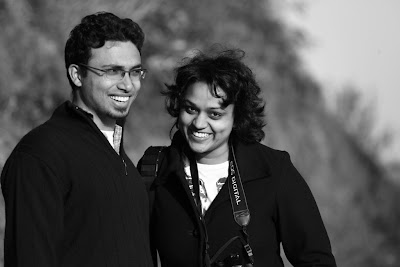 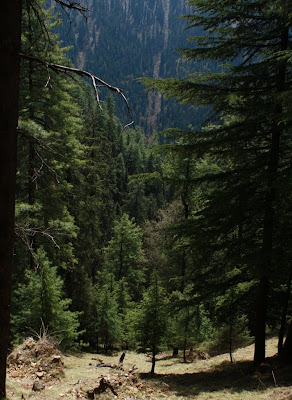 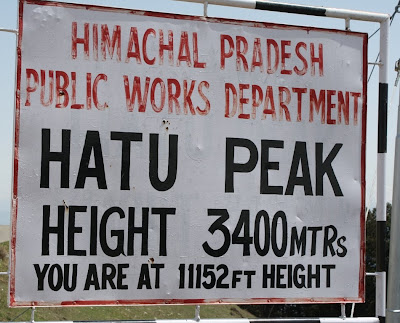 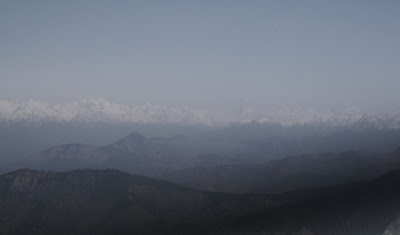 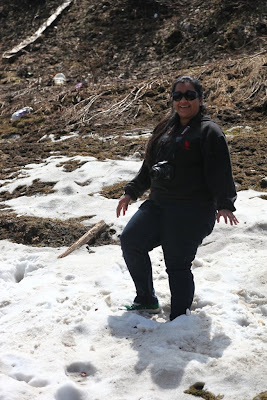 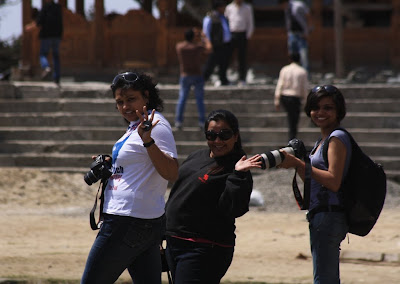 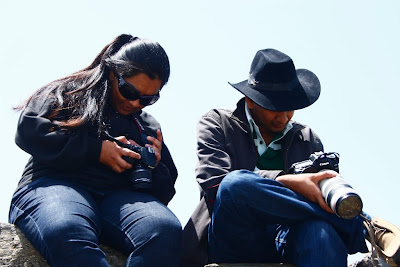 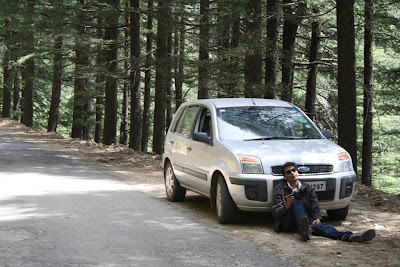 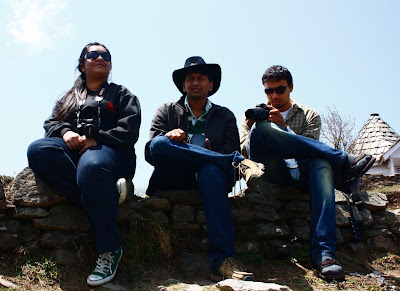 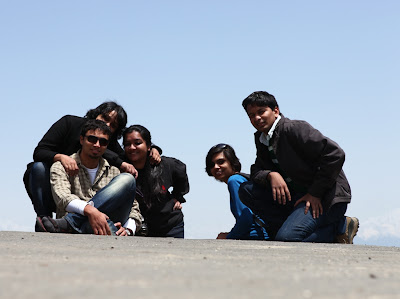 The Tani- Jubbar lake was more like a pond, just that it had a more majestic reflection and made very pretty postcard mug shots. After lunch and a discussion of how one was to get to the Sutlej to quench the thirst for a water body – Akshay exclaimed (looking pointedly at me) that we were a bunch of lazies who did nothing but sat around in a car and that he thought that we should walk it down to the river and back. I quietly slipped out the conversation fearing for my limbs and bless the almighty that sense prevailed and we hired a cab to take us downhill and bring us back. Thus, we came into fitting ourselves into an Omni with a spectacular collection of 90’s Kumar Sanu – Alka Yagnik music. Games resumed by guessing rhyming words which a particular line would end with. For example, if the first line ended with ‘Pyaar’, the second would be ‘Aitbaar’ and then be followed by ‘Ikraar’ and maybe a ‘Karaar’ and so on. Unimaginable levels of precision were reached through this activity and must be tried by those embarking on long journeys – most engaging and entertaining. 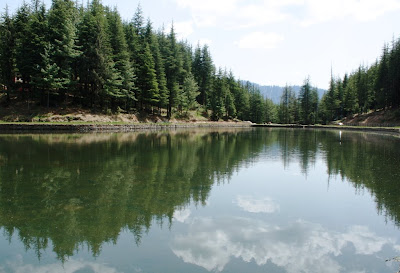 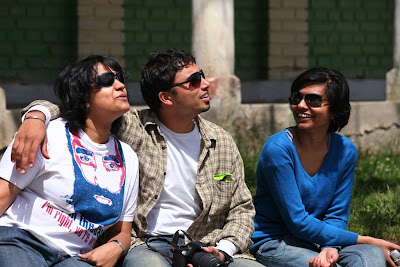 On reaching the Sutlej embankment, we undertook a little trek of sorts though a lot of stones and vegetation to get to the actual river and on contact with the cold running current of the river, it felt as the trip was truly complete. Basu and Akshay undertook stone pelting activities at the river, Neha and Swetha were cheerleaders and I was the impartial judge. On the way back, I, as is customary took a small fall, slipped on the sand and scratched my knee, elbow and most importantly, my camera’s display screen. But all is well, and I tell myself, that it is the sign that my camera has been on enough number of trips! 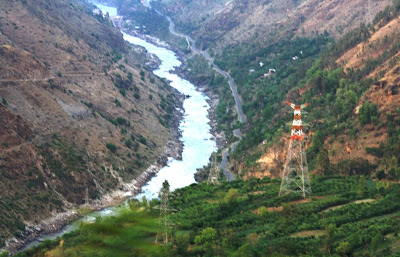 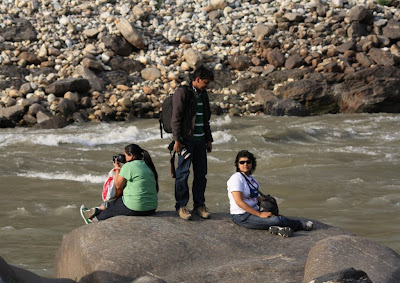 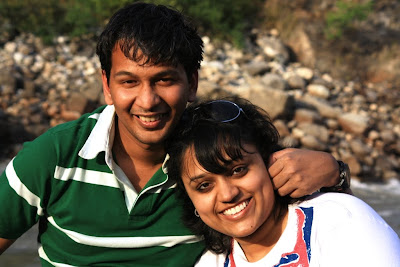 Back to the hotel, after a series of steaming hot water baths, we collected in the alleged boys’ room for a screening of the pictures taken on everyone’s cameras, and further to Basu’s suggestion, we shall also carry projectors to trips, henceforth, Shoita’s ‘Kudewaali’ pictures and Akshay’s ‘I’m-trying-to-photograph-my-own-hand’ photographs are a must-watch on the big screen. 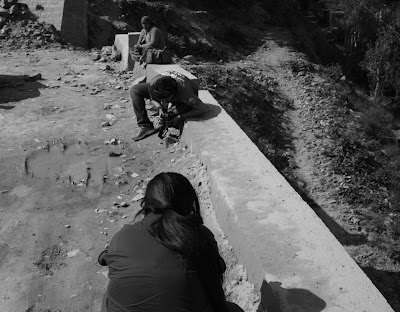 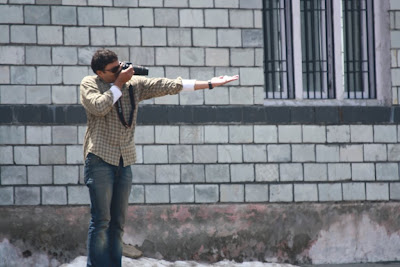 Day three was the drive back, injected with fresh music and constant clicking of the white splashed apple trees against a gradient of mountain ranges which went from blue to lavender, a heavenly sight to eyes which survive in jungles of concrete and smoke. Stopping at Shimla to visit Neha’s home and pahadi lunch – which turned into quite the treadmill walk for me, we walked up the renowned Mall Road and Shoita gamboled the roads dressed as the serial killer from Scream drawing all sorts of glances and causing children to recoil into the parent’s safe arms! 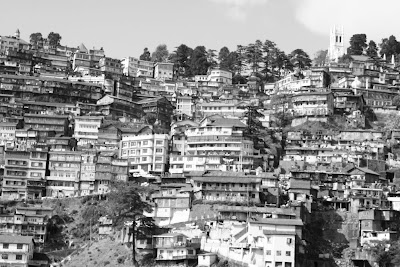 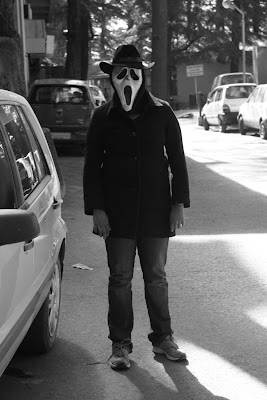 After a sumptuous meal, we walked back down and resumed our journey back home. Accompanied by more jokes, small naps, inadvertently loud singing, sharp turns and more rhyming word games (This one began with the word ‘Akki’ and went on from Panchkula to Chandigarh. Yes, retarded), we reached Dwarka at around 12: 15 at night and Basu won the ridiculous bet which Swetha had initated.

It’s been another night of sleep, and my legs still feel as though they were made of jelly; the trip exhausted and rejuvenated me to extents which were much needed, at the onset of the one year completion.

Till the next time, may the horns keeping bolw-ing! 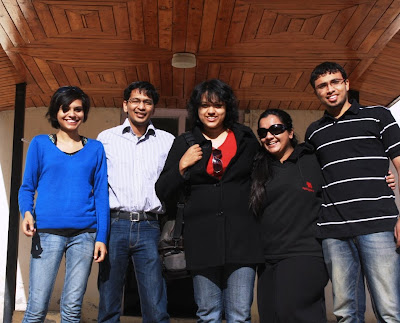 5 thoughts on “The Good Friday Weekend!”